The only reasons I ever go to St. Louis Park, MN are to see movies at the Showplace Icon Theatre and, today, to pick up some baseball tickets. Otherwise, I don’t intentionally direct myself to St. Louis Park.

It’s not that I have anything against St. Louis Park. It’s a Minneapolis suburb home to approximately 45,000 people. It has some nice neighborhoods and a Jimmy John’s. However, despite being the birthplace of the Coen brothers, there’s just not much to do in the small town.

Scrolling all the way to #7 on the list of suggested attractions, I found Westwood Hills Nature Center. It was 75 degrees Fahrenheit and sunny today, so something outside sounded just right. I drove through a few neighborhoods and found myself at a trailhead next to a playground. I got out of my car and started walking.

What I found just past the trees was an expansive marsh surrounding Westwood Lake, the park brimming with lush plant life and the sounds of birds. I walked across a foot bridge over a pond green with algae to get to the nature center’s main trail.

I walked most of the trail (although the floating walkway about two-thirds around the lake was unexpectedly closed) and stopped off at the piers and docks that jut out into the water. I tried and failed to identify the birds landing around me, but enjoyed their tunes. 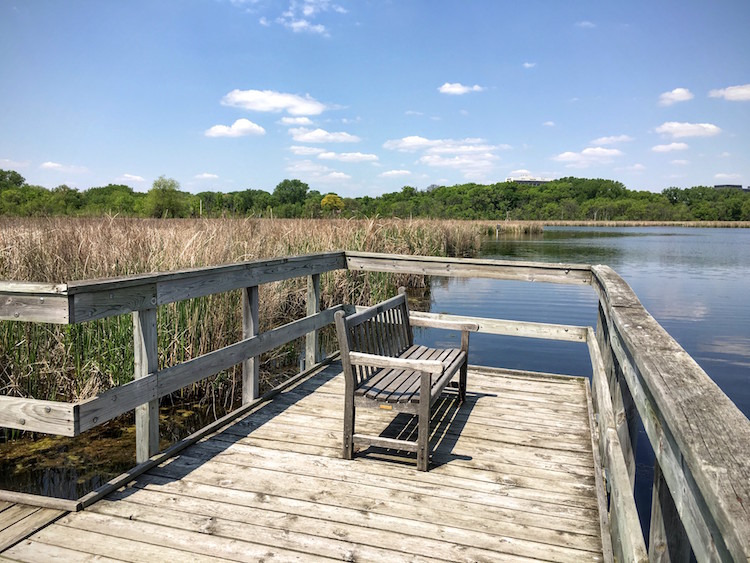 I saw a few people along my route, so I’m unsure if this park really is a hidden gem or just previously unknown to me. Whatever the case, it was an unexpectedly enjoyable diversion for today’s brief stint in St. Louis Park.