First, some personal news: On June 2, at approximately 5:30 p.m., I married the love of my life in Lyons, Colorado. It was a perfect wedding and I can’t thank everyone who made it that way enough. We don’t have photos yet, but I’ll post a few here when we get them.

Leading up to the wedding, I tried to eliminate any unnecessary stressors; and while writing for this blog with its miniscule audience isn’t a lot of pressure, conceptualizing posts and taking the time to write them was an easy thing to brush to the side while I prepped for the wedding.

Then of course came the honeymoon, and there wasn’t a chance I’d be writing from our little island paradise. (We went to St. Lucia, which I highly recommend if you get the chance. Again, photos to come.)

But now I’m back and mostly in the swing of things again, so I thought I’d share the latest development (pow!) in my photography journey.

As I mentioned in my last post, I do have a fear of taking photos of people I don’t know but who know I’m photographing them. It’s not easy for me to hold down that shutter release when I see a stranger staring back at me through the viewfinder. And it’s even harder for me to stop a person and ask if I can take their photo.

A more experienced photographer friend of mine roasted me about this fear a little bit, and I decided he was right: I needed to get over this phobia if I wanted to grow in my photography.

So I spent some time reading about street photography and watching videos on street photography technique, and I convinced myself that it was nothing I couldn’t do. I also decided to purchase a 50mm f/1.8G lens—great for street photography—to essentially guilt myself into getting outside my comfort zone. It’s a relatively inexpensive lens; but still, if I didn’t go out and use it I would be wasting about $200.

I got the lens late last week, and I’ve been obsessed with it since then. The first time I went out, I gave myself this task: I had to ask at least one person to take their photo. The rest of the time I would try some of the stealthy techniques I’d picked up online.

I ended up asking four people for their photographs. But the biggest surprise was that none of them said no! Once I pushed through the difficulty of making that first ask, the other asks came much easier. And I got some good results. 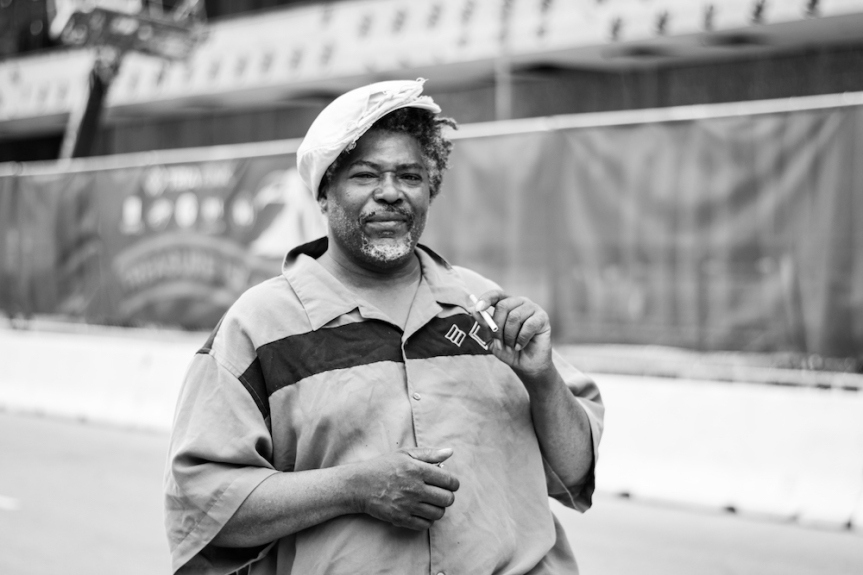 This man rolled up on his bike and started small talk—probably because he saw me taking photos of people nearby. We started talking and he told me that he’d flipped over on his bike the night prior. I asked if he was OK, and he told me he would be when the swelling went down. I asked then if I could take his photo and he obliged.

On the Stealthier Side

For the stealthier photos, this has been my technique:

I try to find someone sitting or standing still. First of all, framing the subject is easier when you’re both not moving all over the place. Plus, you look like less of a creep if you’re not walking slowly behind a person snapping away. Once I’ve framed my shot, I start taking photos. After about three or four shots, the person usually notices me. When they look at me with my camera, I take one final shot and walk away. That last shot is usually the best one, in which I capture the unencumbered emotion of the person as they try to figure out why they’re being photographed. 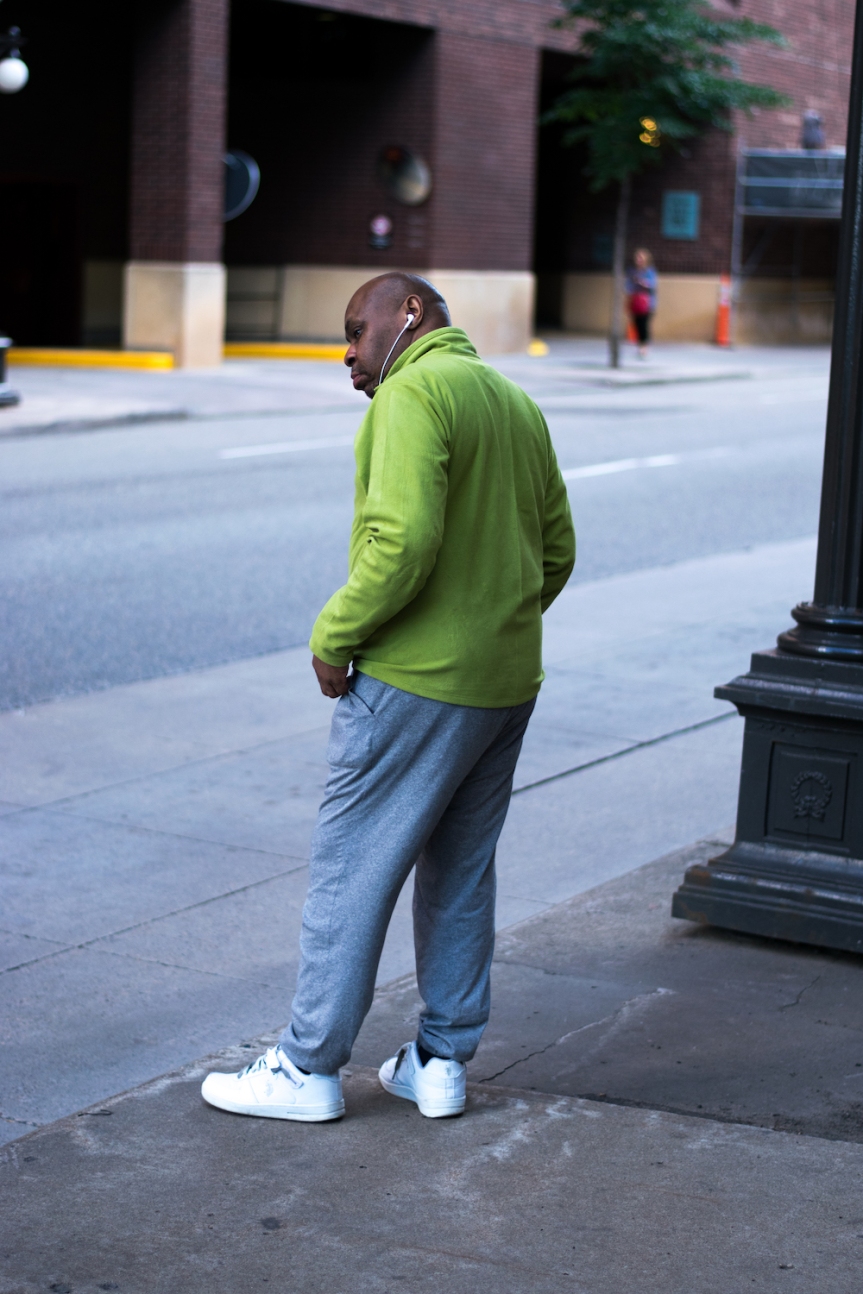 Of course there are some times when I want to take a photo of someone walking towards me. In those situations, I usually try to make like I’m taking photos of something nearby (buildings, trees, etc.), and then I lower the camera and take one shot when the person gets close enough.

I’ve also wanted to get better at editing photos in Lightroom, and this post from James Patterson at Amateur Photographer was super helpful. I’ll let you read his tips for yourself, but suffice it to say that his advice immediately improved the quality of my final products.

On Friday I’m joining the friend who initially nudged me to get over my fear of real street photography for an excursion taking photos in Minneapolis. Thus far I’ve mostly stuck around the Downtown St. Paul area, so I’m excited to get a new perspective.